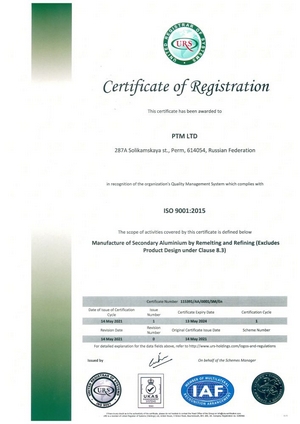 PTM LTD is a privately-held producer of secondary aluminium for the international market.

PTM at a glance:

PTM was established in 1964 as the largest state-owned aluminium scrap processing facility in the Ural-Siberian region of Russia.

In 1993, the company was privatized and became a joint stock company. In 1998, PTM aluminium alloys were approved for delivery to LME warehouses.

Presently we have sales offices and agents in New York, Krakow, and Tokyo. We pride ourselves in maintaining high standards in security, occupational health, environmental standards, waste reduction, and employee safety.

For more than a decade, PTM has been regarded as a leading global provider of secondary aluminium ingots, with a reputation for consistent quality, reliability, and integrity.

sales@ptm.perm.ru
Permtsvetmet
Permtsvetmet JSC (PTM) is one of the leading global manufacturers of secondary aluminum alloys
Copyright © Permtsvetmet, 2017-2019
Made by "ArtDig"
About company Feedback Geography of deliveries Licenses